One of her new works Kateřina Vincourová calls Breath behind the wall. Consisting of plastic castings of torsos and other fragments of the human body she created a strange creature, that may resemble a larger version of an unknown microorganism, skeletal remnant of a prehistoric creature or laboratory mutant from a biological laboratory. The disturbing atmosphere of the scene supports a plastic fan embedded in a wall, evoking the fading breath of a human or other living beings: as if it blows away memories of the past or the smell of rotting corpses. Breath behind the wall is also a huge sculpture in kit form. It shows the artist's interest in the shape variability and the possibility of merging identical units into new groupings and compositions that seem to copy the unstoppable flow of ideas, as well as its obsession with game. Just as a child can assemble a new world out of the most ordinary things or accidentally found rubbish, Kateřina Vincourová also works with banal materials and items. Through them she tells micro-stories based on personal as well as a collective history and transforms it into three-dimensional objects and installations. However light, even frivolously some of them seem at first glance, which is also influenced by the choice of materials associated with physical intimacy (remnants of clothes, clothes hangers, combs, underwear elastic), the author is, rather than a tangible body, interested in it’s non materiality. She turns to the body "language" – to the nonverbal communication communicated (and shared) by gestures, touches and movements, that might carry the unspoken or untold feelings and emotions, that can be loving, hedonistic, but also painful.

At the same time she is interested in the body in it‘s absence - as an imprint, a cast or a memory; not only through this Vincourová says about our fragile physicality and often usurpatory relationship of society and culture to our physical essence, more than through the exposed body, but she also points out (although not literally) a body threatened, unstable, taken or forgotten. Semantic ambiguity of the work by Kateřina Vincourová also confirms the name of the exhibition. The appeal of "Whenever you say" does not only refer to the promise of bodily pleasures, however strong association of sexual loyalty or erotica for sale it raises. "Whenever you say" can be understood as well as an expression of love that fills man, but it also takes part of his freedom, as well as an appeal to personal courage - a willingness to change what seems unchangeable. The author speaks through it to herself and to the viewer and at the end of this sentence may be yet to add anything ... 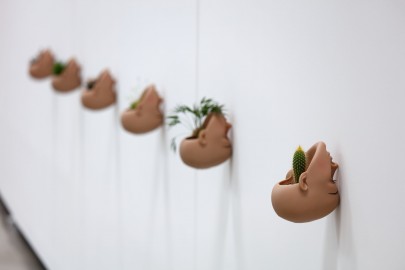